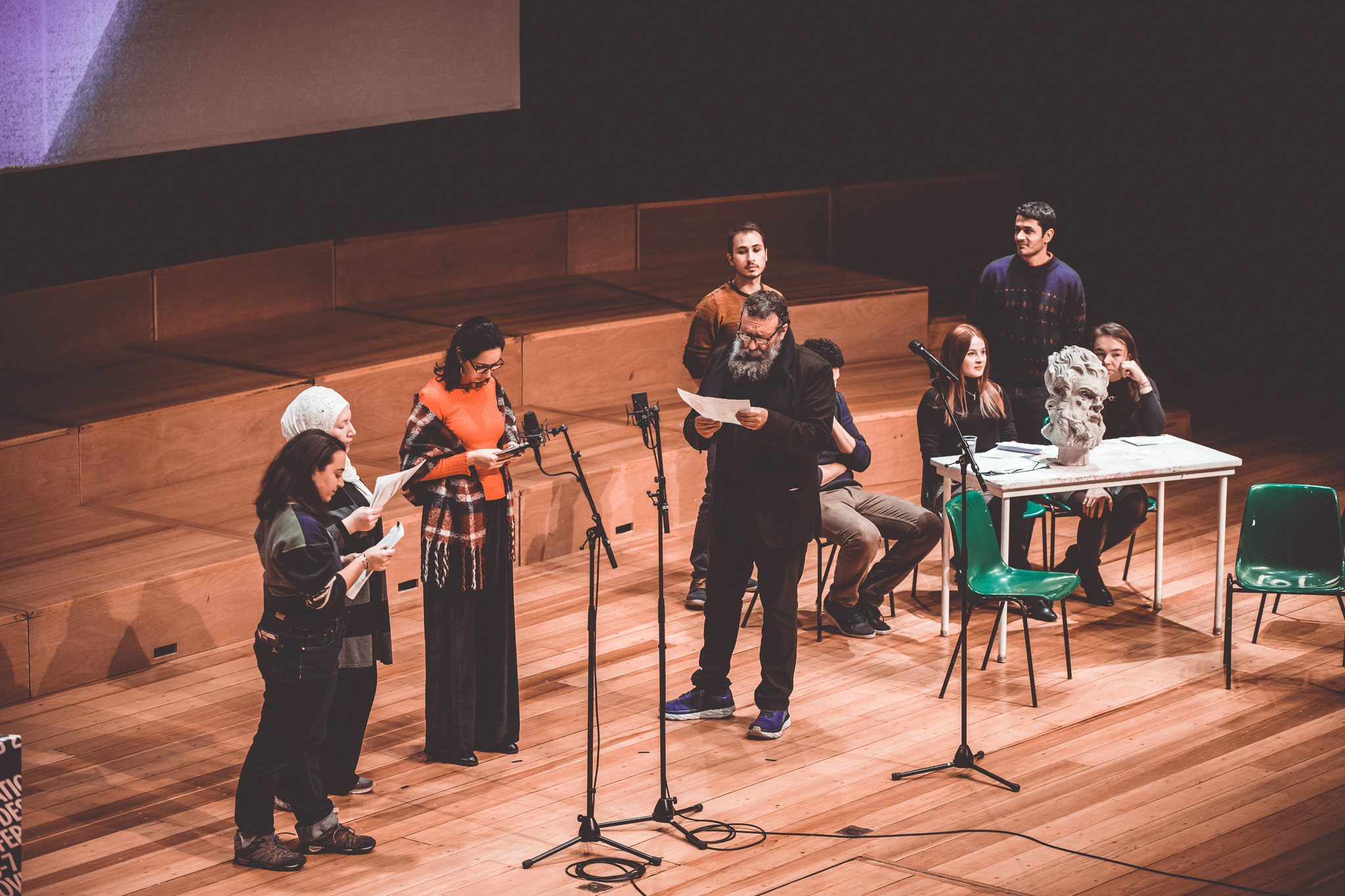 Who we are:
We are members of the Post Collective or POCO for short. We are artists, designers, activists, students, social workers, teachers, researchers etc. We formed the collective just under a year ago from the 2018 Open Design course for refugees and asylum seekers conducted at KASK in Gent. This course is a groundbreaking educational initiative that allows those who would not usually have access to education institutions and resources, namely refugees, asylum seekers and sans papiers, to develop over a period of three month skills and knowledge across a range of floss software, peer to peer learning activities, design making and co-creation projects. Our collective arose out of the wish to continue working together after the completion of the course and to continue developing possibilities for co-learning and co-working directed towards establishing a sustainable and collaborative platform for all the collective participants, regardless of their legal status.

We Invite you.
As our opening piece demonstrated in a rather vocal way we invite you as the participants of this conference to join us in thinking about, discussing and implementing our collective aims and aspirations. Not just at the conference but into the future and especially in regards to our three month residency at the Kunsthal in Gent. One of our fundamental aims is to build a environment where people like us do not need to struggle to be assimilated but instead are able to begin to rethink and re-conceptualize critically a future where the identity of the refugee is celebrated and valued; and as Hannah Arendt argued “to become the vanguard of their people.” It is usual to’ invite’ refugees into one’s world and society but the collective is about reversing this mindset and of inviting you to participate in our world and our project. The collective seeks to forge ongoing connections and modes of exchange with a range of other groups, individuals and organizations.

What needs are there?
It’s crucial for the collective to achieve a level of participation in society and the local communities and not just fill in the gaps of representing diversity and token inclusion. To achieve this we aim to bring about a situation where refugees, asylum seekers and sans papier are able to access resources and levels of agency that are usually denied them.

We are here to find allies and accomplices, to advice and support in accessing such resources, facilities and instigating these forms of agency?

Collective action
That we are a collective rather than another type of group or organization is significant. For one thing it indicates the importance of an equal level of involvement and participation by all its members in the all processes of co-production and co-management. A collective provides more fluid and open capacities for exchange with other organizations, institutions and individuals.

It calls for collective action towards accessing resources and employment for its members and also of actively advocating and working towards bringing about increased access to resources and levels of agency for the broader community of refugees and sans papier.

The paradigm
Giorgio Agamben in his 1993 essay ‘Beyond Human Rights’ refers back to Hannah Arendt’s article “We Refugees” to argue that the role of the refugee in today’s world provides ‘a paradigm of a new historical consciousness. ‘  He explains that “ if we want to be equal to the absolutely new tasks ahead, we will have to abandon decidedly, without reservation, the fundamental concepts through which we have so far represented the subjects of the political, Man, the citizen and its rights, but also the sovereign people, the worker, and so forth) and build our political philosophy anew starting from the one and only figure of the refugee.”